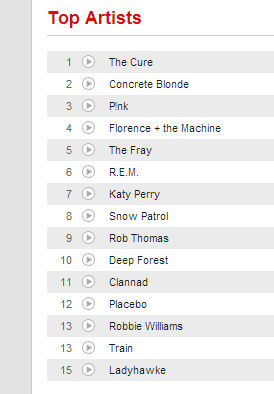 Who do I listen to? On any given day you’ll find at least one track from The Cure on my playlist. I could listen to them all day, every day. Along with Concrete Blonde, they’ve provided the soundtrack to my life since I was a teen and still do. If I look back at all the big standout moments of my life their music was there.

See my Top Artists list off Last.fm for more of my faves (and if you’re on Last.fm feel free to connect with there – my username is Unstuck_Theory.)

What do I listen on? A couple of years ago I switched from physical CDs to iTunes, and then more recently to the streaming service Spotify.

I find Spotify absolutely brilliant. At first I was a little hesitant about the cost, so signed up for the trial version to see if it was something I would use. It only took a day or two to realise that it was something that really fit my lifestyle so I signed up for their premium plan. If I think of a song I want to listen to, they most likely have it and it only takes a click or two to add it to my play queue.

I’ve also got my current favourite tracks set up in playlists for easy access, as well as a few themed playlists for different moods and tasks – playlists with names like:

I can listen via Spotify on my laptop (which I have hooked up to the stereo for awesome sound) or with headphones on my phone or tablet. My account allows my playlists to follow me from device to device and there’s no mucking around with syncing playlists or transferring tracks to and from devices – it’s all automatic. Brilliant 🙂

Where and when do I listen? 99% of the time, if Hubby’s not home, I’ve got music playing in the house. If Hubby is home, it’s 99% likely that he’ll have the telly on – so I just put my headphones on and keep the tunes playing 😉

When I was working fulltime as a programmer my favourite part of the workday was when I could put my headphones on, hit play and switch the office noise out for a little while. I found the best music to code to was something upbeat with no words, very very few words or non-english words. Trance and dance music worked a treat, as did a lot of world music and groups like Deep Forest and Clannad.

Why do I listen? To escape. To enjoy. To chill out. To be carried away. To get motivated. To keep motivated. To dance – while no-one’s watching! To mirror my soul. To accompany my tears. To know I’m not alone. To fill the space left by silence. To fill my home with a happy sound. To fill my heart with delight.

What are you currently listening to?

Skipped a few weeks of Listmania, but back for Week 13 and having a bit of a daydream with this week’s prompt.

“Living or dead what (assuming famous) people would you like to invite to a once-in-a-lifetime dinner party (and why)?”  (Listmania at Home Life Simplified)

Okay, so this may be cheating a little but after thinking about who I’d invite I realised that there were quite a few fictional characters I’d like to host at a dinner party. So here’s my list of (famous?) oh so fictional people (a good smattering of non-human too) .

#1 – To start with my most loved character from one of my favourite authors, Nobody Owens (“Bod”) from Neil Gaiman’s The Graveyard Book. I know it’s odd, but I feel kind of motherly towards him.

#2 & 3 – With the mood already set to dark and gloomy, my next guests would be Lestat and Louis from Anne Rice’s Vampire Chronicles. Their presence alone is bound to create a little tension in the room and I’m sure they’ll make all the other guests feel underdressed.

#4 & 5 – Keeping the fictional vampire guests going – Nathaniel Cade from Christopher Farnsworth’s The President’s Vampire series and his … hmmm, “handler” sounds so disrespectful … his “co-worker” Zach Barrows. An old vampire working with the Government in modern times – I’m sure Zach’s stories of some of their exploits will have the whole table transfixed.

#6 & 7 – A little out of this world action next, Captain Jack Harkness (played by John Barrowman) and the Tenth Doctor (played by David Tennant). My only concern is that weird alien stuff always seems to happen when they’re around.

#8 – Nathan Fillion as Captain Mal Reynolds from FireFly and Serenity. *sigh* … you can’t take the sky from me … I’m sure he’d have lots to discuss with Captain Jack and the Doctor (although I have a suspicion the Doctor will be far more fascinated with the non-breathing guests).

#9 – Another great mind – I think we need to throw in The Mentalist, Simon Baker’s character Patrick Jane. I wonder what he’d read in Lestat and Louis?

#10 & 11 – And the last two guests – Benedict Cumberbatch’s Sherlock and Martin Freeman’s Watson. Might need to seat Captain Mal and Watson between Sherlock and The Mentalist just to avoid any potential clashes.

#1 – The amazing Robert Smith from the Cure. I’ve been listening to his music since a teenager and have spent many a night falling dreamily into his lyrics.

#2 – Mr Stephen Fry. Now that would just be totally awesome. Can you imagine the conversation? Plus we could all compare smart phones and such, and tweet about it all afterwards.

#3 – Neil Gaiman. He’s just so intriguing and so many stories to tell.

Your turn – who would you invite?

“What things do you dream (or plan) of learning about in your life? This could be anything from a craft to a life lesson.”  (Listmania at Home Life Simplified) 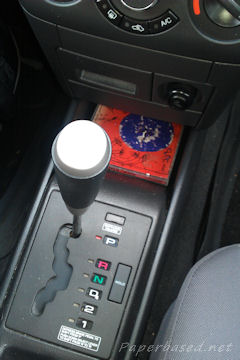 Okay, so I can’t honestly answer this week’s prompt without mentioning the major life skill I don’t possess …

I’d love to be able to drive, but have never been able to get past the anxiety and fear to do so.

My husband has been wonderfully understanding and supportive about this and is helping me to build my confidence to get there, slowly. So the most major item on my list that I’d love to learn is how to drive.

Aside from that, there are so many things I’d love to learn to do or just learn about. The list keeps growing, especially on days where I’ve been on Pinterest!

{Side-thought: Was just thinking how funny it is that two of the things that popped into my head were sewing related when I’m much more a papercraft type person, but then realised that both are part of or contribute to my vision of an organised but cosy home.}

This prompt also really got me thinking about one of the core ideas we promote at the library – the idea of lifelong learning. That it’s important to be always improving your skills and keeping yourself current, especially with the way jobs and careers have changed.

One of the bits I love about the whole concept of lifelong learning is that it doesn’t necessarily have to be formal training or a specifically work-related skill. It could be like my wanting to learn how to make a patchwork quilt. While I’m learning the specific skill I’m also keeping my mind active and utilising a heap of “invisible” skills – I’m exercising my problem solving skills, my ability to focus, comprehension and following of instructions, research skills to find those instructions in the first place, organisational skills, communication and a myriad of other skills required to complete the project.

You can see from this why it’s so important to stay curious and keep learning new things – it’s about far more than what you initially set out to learn, it’s all the extra stuff you learn and practice along the way. And the most exciting part of all? Nowadays if you want to learn something new there’s likely to be a free tutorial just a few clicks away on the web or on the bookshelf at the library, making the whole idea of lifelong learning as easy as.

Your turn – what would you most like to learn? 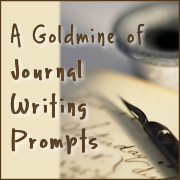 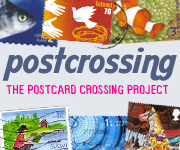 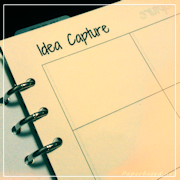